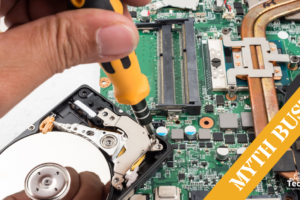 Recent reports about the ‘waste crisis’ have generated even more confusion among the Australian public about what can and can’t be recycled. This year for National Recycling Week (11-17 November), Planet Ark busted some common recycling myths, helping to dispel misconceptions about recycling practices in Australia.

Information about e-waste can sometimes be equally confusing. We busted some e-waste myths of our own to combat this and spread some truths about e-waste recycling in this country.

Myth 1: Tossing e-waste in your recycling bin is okay 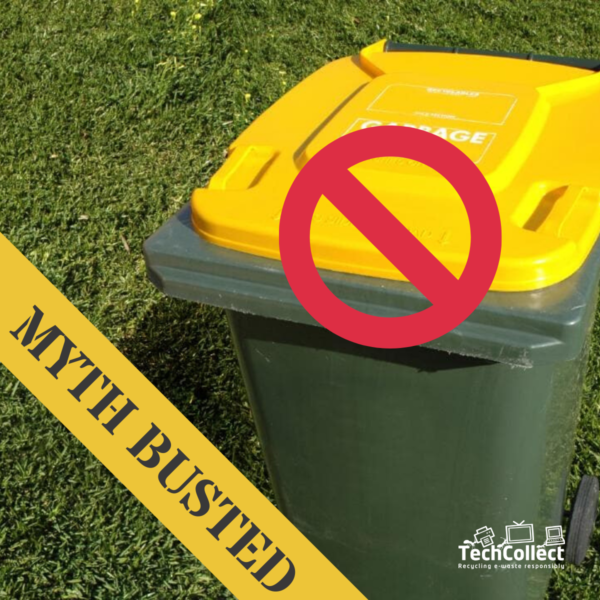 Busted – E-waste is recyclable. However, these items do not belong in your recycling bin. E-waste in your kerbside recycling bin is treated as contamination and removed from the stream at the material recovery facility, where it will then be sent to landfill.

This common misconception represents a notion called ‘wish-cycling’ – where people place items in their recycling bin in the hope that they will be recognised, separated out and sent to the appropriate place to be recycled. While most people have the best intentions, this undermines good recycling practices and ends up meaning more material is sent to landfill.

E-waste must be taken to a dedicated drop-off site or event. For computers, printers, TVs and computer accessories, go to www.techcollect.com.au and find your nearest TechCollect drop-off site. For all other e-waste, check out Planet Ark’s www.recyclingnearyou.com.au.

Myth 2: Your obsolete electronics are worthless 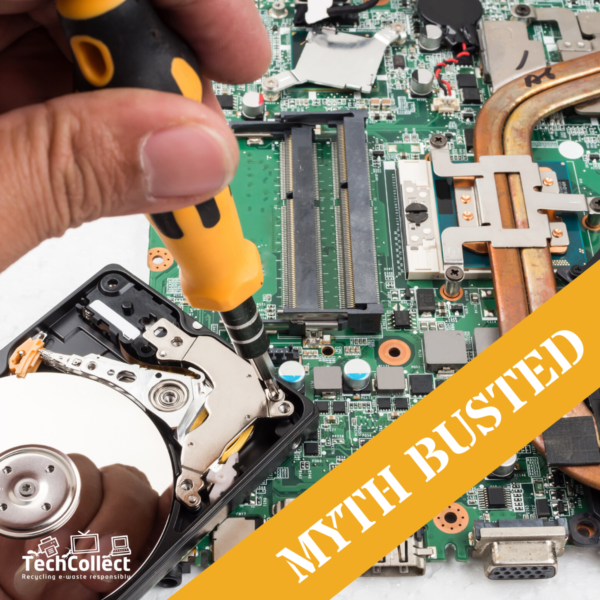 Busted – Old technology contains recoverable and reusable resources that can be properly extracted and used in new products. Your electronics are certainly not worthless.

However, while monetary value exists in the materials extracted from e-waste, there is also a large cost associated with reverse logistics (i.e. getting the product to a recycler) and the cost of recycling itself. In many cases, these costs are greater than the value of the materials themselves. This is the reason in Australia under the National Television and Computer Recycling Scheme, the producer is responsible for funding the cost of recycling. It’s part of a concept called product stewardship, where it is recognised that a shared responsibility exists between producers, government and consumers to ensure the impact of the product on the environment is minimised. The producer is responsible for funding, government takes care of ensuring a system is in place, and the consumer’s job is to return the product to the appropriate place for recycling.

As consumer awareness around the circular economy grows, pressure mounts on governments to develop end markets for recycled materials. The recently announced ban on exports of waste plastics, paper, tyres and glass will need to be accompanied by a robust plan for building markets for these products in this country. As demand grows for these materials we may see their value inflate, and at the same time we may also see the cost of recycling go down as technology improves. All going well, this may ultimately mean that recycled content is more cost effective than mining virgin resources, (which in some scenarios it already is).

Myth 3: Recycling doesn’t matter because it all ends up in landfill 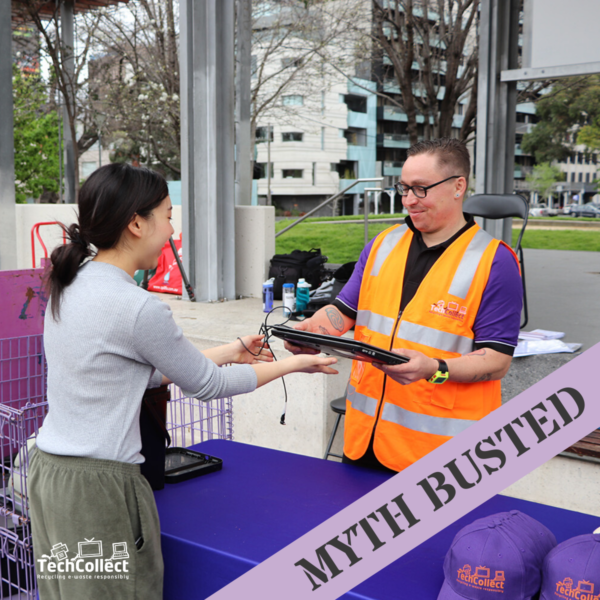 While the closure of Chinese borders to recyclables has made it harder to find a home for these materials and resulted in some of Victoria’s recycling being sent to landfill this year, the vast majority of councils have now found a solution, and a recent report has said that the problematic SKM sites which will now be operated by Cleanaway are set to reopen by the end of 2019. The media frenzy around this topic has sadly resulted in a loss of trust in the recycling industry and has led some people to throw their hands in the air and abandon recycling altogether. This is counterproductive to the cause and has undermined the well-developed recycling habits of many Australians.

E-waste has not been immune to the effects of the China ban, however as this collection stream generally has lower rates of contamination, finding end markets for these materials has not been as much of an issue. Under the National Television and Computer Recycling Scheme (NTCRS) that has been operating in Australia since 2011, over 90% of e-waste materials collected have been recovered for reuse in the manufacture of new products. In the last financial year, TechCollect achieved a material recovery rate of 93%, which was greater than the previous year.

Your recycling efforts always matter – keep it up! 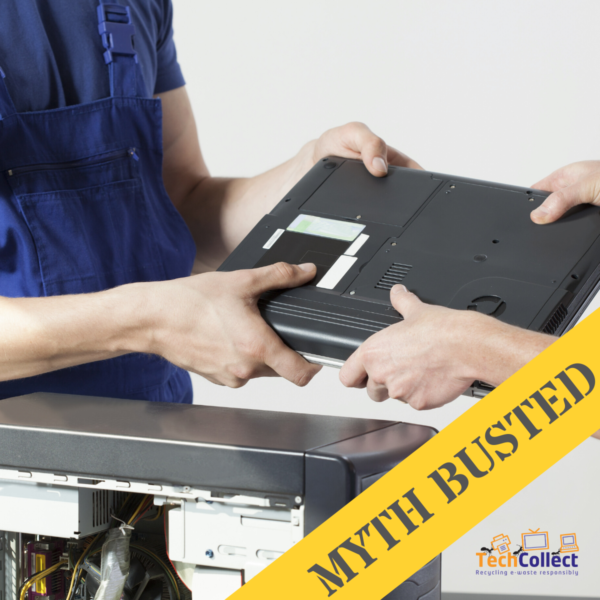 Busted – All e-waste committed for responsible recycling makes a difference.

Urban mining will be critical to successfully establishing a circular economy and preventing the need for virgin resources. Already one recycler in China produces more cobalt than the country mines in one year.

With an abundance of resources already sitting above ground, the challenge is developing efficient systems to capture these and ensure responsible treatment. As an emerging industry, companies now are investing in a range of new technologies that extract metals and minerals from e-waste, and solutions are even emerging for materials that have been previously seen as problematic, such as plastics.

By bringing your old electronics to the right place, you are ensuring the supply of valuable materials and helping to build an industry that prevents tonnes of carbon emissions from entering the atmosphere.

Myth 5: Recycling e-waste is too hard 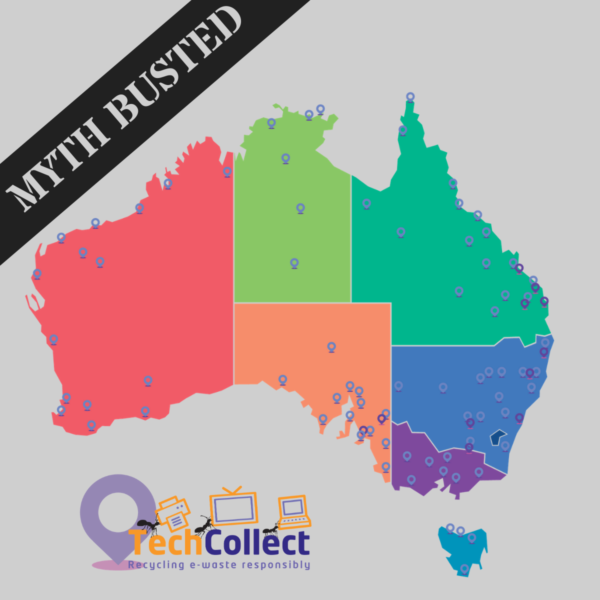 Busted – The number of drop-off locations for e-waste around Australia is constantly growing. TechCollect has over 250 permanent free drop-off sites around Australia, as well as a number of drop-off events each year. We’re also making it more accessible for businesses to book a collection, bringing our services to schools, and will soon be announcing an exciting initiative which will make recycling accessible to all Australians. For materials not accepted under the National Television and Computer Recycling Scheme (NTCRS), Planet Ark makes it easy to find where you can take these items, by searching your postcode at recyclingnearyou.com.au.

Error: Error validating access token: The session is invalid because the user logged out.
Type: OAuthException
Solution: See here for how to solve this error

You can now recycle worn out sports shoes as part of a trial recycling program in Victoria. Recycled shoes will be turned into sports matting for playgrounds, sporting surfaces, gym mats and retail flooring.

Share on FacebookShare on TwitterShare on Linked InShare by Email