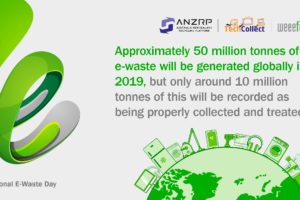 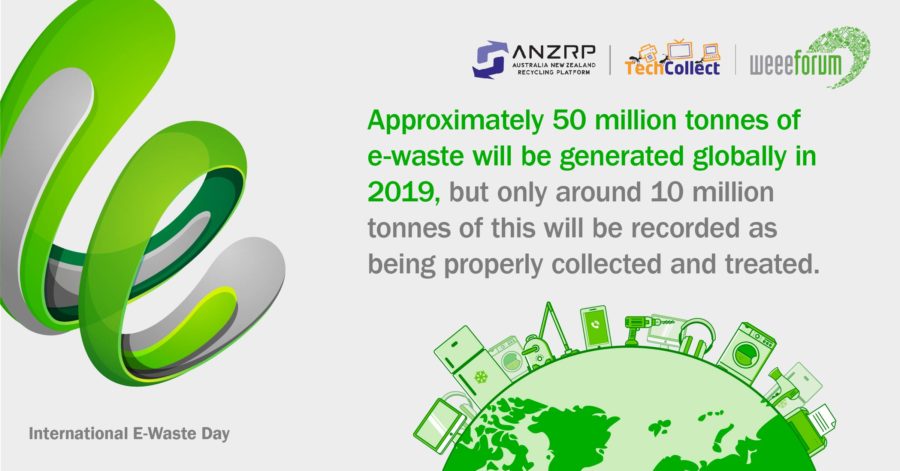 The second International E-Waste Day held on October 14 to promote the responsible management of e-waste has been hailed a huge success, after 112 organisations from 48 countries across six continents took part.

Driven by the WEEE Forum, an international association of e-waste collection programs including TechCollect, the event brought together electronic waste stakeholders across the world to promote the correct disposal of e-waste to enable reuse and recycling.

According to the WEEE Forum, Oceania (Australasia, Melanesia, Micronesia and Polynesia) produces the most e-waste per inhabitant, at 17.3kg per person per year compared to just 1.9kg in Africa.

The WEEE Forum’s only Australian member, ANZRP this year celebrated an important milestone, having recently surpassed 160,000 tonnes of e-waste collected and recycled since inception through its national TechCollect program.

This represents an environmental net benefit equivalent to planting 2.8 million trees, or a reduction in annual electricity usage equivalent to 19,000 Australian homes.

ANZRP CEO Warren Overton said collaboration across sectors is key to these achievements.

“ANZRP-TechCollect is committed to working with the electronics industry, government, community and most importantly its members to deliver outstanding environmental outcomes,” he said.

“As Australia’s only not-for-profit service provider under the National Television and Computer Recycling Scheme, our value proposition is to deliver best practice e-waste collection and recycling services in Australia and New Zealand.”

According to the UN, only 20% of global e-waste is formally recycled through official programs like TechCollect each year, meaning 40 million tonnes are either placed in landfill, recycled to lower standards, burned, or illegally traded and treated in a sub-standard way. This is despite 66% of the world’s population being covered by e-waste legislation.

Warren said the use of technology and demand for electronic devices will only continue to rise. “By 2020 it’s predicted that there will be 25-50 billion devices connected to the Internet.

“While we encourage users to extend the life of their machines wherever possible, we recognise that efficient takeback programs and responsible recycling will be key to keeping materials in the value chain for as long as possible,” he said.

EU Commissioner for Environment, Maritime Affairs and Fisheries, Karmenu Vella said in his dedicated video message recorded for the occasion, “On the 2nd International E-waste Day, we join our voices to make this great initiative known not only in Europe but worldwide.

“All the activities that take place around the world during this day show that electronic waste is a big issue and what we can do to reduce, reuse and recycle.”

Pascal Leroy, Director General of the WEEE Forum, said, “We are so pleased with the participation and high profile of the day. Having so many countries involved and so many different events organised surpassed our expectations. We are glad the event was so impactful, especially in the context of the next year’s mandatory collection targets in the EU, which will be impossible to reach without the involvement of all actors in the value chain, including citizens. We are confident that International E-Waste Day contributed to improving the societal awareness about the proper disposal of e-waste in those countries that implement e-waste legislation.”

Error: Error validating access token: The session is invalid because the user logged out.
Type: OAuthException
Solution: See here for how to solve this error

You can now recycle worn out sports shoes as part of a trial recycling program in Victoria. Recycled shoes will be turned into sports matting for playgrounds, sporting surfaces, gym mats and retail flooring.

Share on FacebookShare on TwitterShare on Linked InShare by Email