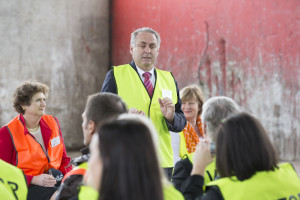 TechCollect is the official program of ANZRP which is one of three approved ‘co-regulatory arrangements’ that operate under the Federal Government’s National Television and Computer Recycling Scheme.

Senator Farrell said the launch of TechCollect at the Moonee Valley drop-off centre are important milestones for the National Television and Computer Recycling Scheme, which was made possible by the Gillard Government’s landmark Product Stewardship legislation.

“Thanks to this scheme, hazardous materials including lead, mercury and zinc will be prevented from entering the environment and valuable non-renewable resources, including gold and other precious metals will be recovered for reuse,” Senator Farrell said.

“ANZRP, on behalf of our members, is delighted to introduce this free nationwide recycling service which will assist in significantly reducing the volume of e-waste that ends up in landfill. We encourage householders and small businesses to dispose of their end of life (EOL) televisions and computer products in an environmentally sustainable way, which TechCollect is able to guarantee,” said Carmel Dollisson, Chief Executive Officer, Australia and New Zealand Recycling Platform Limited.

Drop-off centres in Victoria, New South Wales and South Australia are available to receive EOL television and computers for recycling from today, with additional services to be rolled out over the next 16 months.

“Australia’s e-waste issue can only be tackled by companies and communities working together, we take product stewardship seriously and look forward to working with our members, local councils and recyclers to provide communities with a free sustainable recycling service.” said Ms Dollisson.

Moonee Valley’s Mayor, Cr Jim Cusack, said that Council is excited to be a part of this new initiative to provide a free e-waste collection service to our community. “For a number of years now Council has provided residents with the opportunity to recycle unwanted computer products. TechCollect, which will extend our service to accept televisions as well other computer recyclables, is a fantastic step forward in our recycling efforts and will further reduce waste sent to landfill,” said Cr Cusack.

About TechCollect
TechCollect is the public face of the Australia and New Zealand Recycling Platform Limited (ANZRP), one of three government approved co-regulatory arrangements for the implementation of the Federal government’s Product Stewardship Act 2011 and the new National Computer & Television Recycling Scheme (NCTRS). For more information visit www.techcollect.com.au