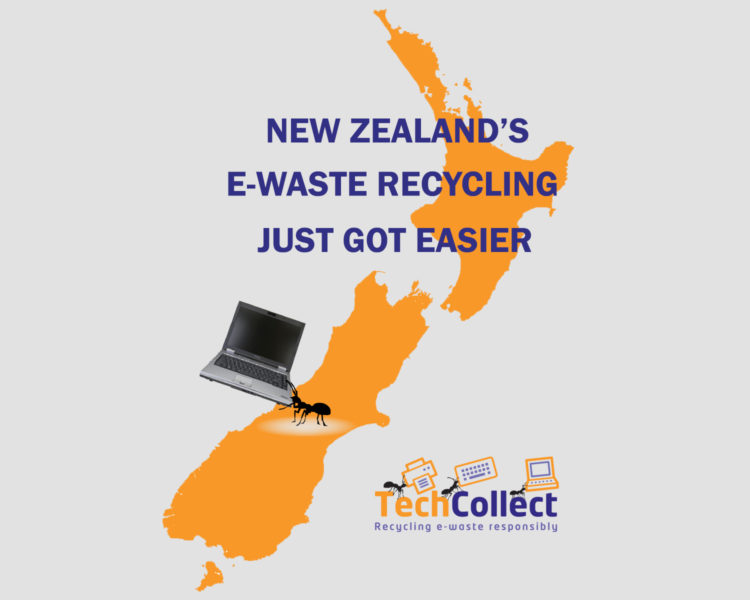 E-waste recycling just got a whole lot easier for New Zealand with the launch of TechCollect, a free e-waste collection and recycling pilot program.

The Australia and New Zealand Recycling Platform (ANZRP) has partnered with New Zealand retailer OfficeMax to provide a convenient network of 16 retail locations throughout the country where consumers can drop off their unwanted e-waste – for free!

The pilot program aims to recycle thousands of kilograms of e-waste and is supported by some of the world’s leading electronics brands including Dell, Microsoft, Toshiba, Canon, Epson and HP.

ANZRP CEO Warren Overton says it’s estimated that up to 50,000 kilograms of e-waste could potentially be recycled that would otherwise end up in landfill.

“TechCollect was developed to capture end-of-life electronics and commit them to a downstream recycling process and, given the ongoing growth in e-waste, will go a long way to achieving a circular economy,” he said.

“It’s great to see some of the world’s leading technology brands supporting the New Zealand pilot program despite there being no mandatory requirement for them to do so,” said Mr Overton.

OfficeMax’s Sustainability Manager Julie Roberts says the company is taking charge by offering the recycling of e-waste for the first time to combat the mountain of waste generated by the nation’s growing tech obsession.

“As consumer habits become more fickle, we’ve seen an increase in the amount of hard waste that hasn’t been recycled or recycled correctly.” said Ms Roberts.

The initiative comes amid recent revelations that New Zealanders are among the world’s worst e-waste offenders, producing an estimated 20kg per person each year, according to the International Telecommunications Union.

TechCollect is reminding customers to ensure all sensitive data is removed from devices prior to dropping off.

Croxley currently processes more than 200 tonnes of recyclable material each year, including non-biodegradable plastics and is the only recycler to offer a secure pathway to repurpose electrical waste products. Metal and circuit boards are separated for recycling, while plastic is sent to local manufacturers to be used in items and materials such as electric fence insulators.

OfficeMax is a leader in office supplies and teaching resources, stocking everything from pens and cleaning products to robots and coding books. We’ve been a part of New Zealand workplaces and homes for more than 140 years.

We’ve had our roots in New Zealand for a long time, beginning with the establishment of stationery business Coulls Somerville Wilkie in 1871 and publishing company Whitcombe and Tombs in 1888.

Today, OfficeMax is one of New Zealand’s leading office and school resellers, offering not only tens of thousands of products, but also giving jobs to more than 800 Kiwis locally across our head office, sales offices, distribution centres and 16 retail stores.

ANZRP manages the TechCollect national e-waste recycling service, free to the public and funded by many of Australia’s leading technology importers and manufacturers dedicated to responsible recycling.

TechCollect is committed to setting the highest Australian standard for responsible recycling of e-waste. It is Australia’s only government approved, industry backed, not-for-profit e-waste recycling service under the National Television and Computer Recycling Scheme. Visit techcollect.com.au for more information and to find your nearest collection site.