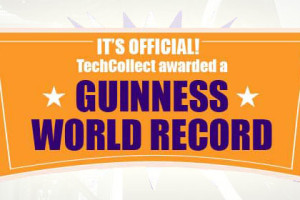 At an e-waste future forum hosted by TechCollect this morning, TechCollect announced that Australians have played a significant role in setting a new Guinness World Record of the most e-waste ever collected for recycling in one week.

Australians participated in the week-long campaign in late April this year which saw over 474 tonnes in old TVs, computers and printers collected for recycling by TechCollect across Australia.

“The amount collected is the equivalent of approximately four (4) blue whales in weight, which is a lot of e-waste, and we commend the community, our collection partners and recyclers for their support”, said Carmel Dollisson, CEO of TechCollect.

“Setting a World Record for the most consumer electronics collected for recycling in one week is a wonderful outcome in the first year of the National Television and Computers Recycling Scheme (NTCRS), it has increased the awareness of the community on the ease and benefits of recycling”, added Dollisson.

“We saw Australians clean out their homes, de-clutter their lives and ensure that all of that old, unwanted and unused e-waste didn’t end up in landfill – which is a great outcome for the environment,” commented Dollisson.

Many Australians do not realise that over 90% of old TVs, printers and computers can be recycled and made into new items, “This Guinness World Record will help to increase the number of Australians who are aware that they can recycle their e-waste for free,” commented Dollisson.

Up to last year, only 10 – 17% of Australians’ e-waste was being recycled, and approximately 16.8 million TVs, computers, printers and their accessories were disposed of each year. The new scheme will increase e-waste recycling to 30% this year, and seeks to increase this to 80% over the next 10 years.

“The e-waste problem in Australia is growing rapidly with 181,000 tonnes of TVs and computers expected to reach the end of their useful life by 2027/28 .

TechCollect is funded by over 60 of Australia’s leading technology companies who are committed to recycling responsibly, these companies fund the recycling which is why it is a free recycling service for households and small businesses.

There are over 70 permanent TechCollect recycling sites across Australia, which are open year round and run in partnership with local councils and waste management companies.

“Just because the Guinness World Record attempt is over doesn’t mean you can’t recycle for free – just jump online and find out where the nearest TechCollect drop-off centre is located near you.” concluded Dollisson.

TechCollect accepts any make and model of computers and accessories, printers or TVs but unfortunately cannot accept microwaves, power tools or whitegoods. You can find recycling options for these and other items by visiting Planet Ark’s website recyclingnearyou.com.au